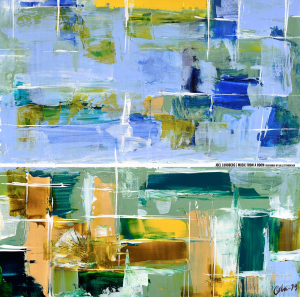 Joel Lundberg - Music from a room - Performed by Kalle Stenbäcken

Joel Lundberg
€15.99
LP
In stock:
Delivery time:
EU: 2-6 workdays, Outside EU: 4-10
Item:
3844035
Facts Numrerad 1- 100
Everything began on a green, short-pile carpet - the kind that
gives you rug-burn if you slide on it. There in the living room of
my childhood home stood a vinyl record cabinet. And Beethoven,
Sibelius, Jimi Hendrix and Otis Redding. My parents' records
started me on a trip that is still ongoing. An inner journey - but
also a physical one - including concerts, tours and a Master's
Degree in improvisation and composition.
I got the desire to create my own music, became interested in the
architectonics of music, and how sound waves have the ability to
stir feelings, which in turn can have physical manifestations. There
were many instruments at my parents' house, so I had wonderful
opportunities for both playing and composing.
Since then many impressions, encounters, heroes and sources of
inspiration have followed. Some have been with me all the way,
others have been detours, but together they have built my musical
foundation - my backbone. Some say you are what you eat, but
for me it's more like I am what I listen to. I am a product of my
continually expanding record collection: Kraftwerk, Neil Young,
Radiohead, Leonard Cohen, Stravinsky, Bartók, Debussy, Dylan,
NEU!, Mingus, Miles.
My ambition has always been to compose with as little compromise
as possible - but to shoot from the hip hasn't worked for me.
Frank Zappa says: "The most important thing in art is The Frame.
For painting: literally; for other arts: figuratively - because, without
this humble appliance, you can't know where The Art stops
and The Real World begins. You have to put a 'box' around it
because otherwise, what is that shit on the wall?"
I also need a frame, and for this project I've been inspired by
Impressionism. You could see Music from a Room as a homage to
the Impressionists who were active in Paris around the year 1900,
spiked with my diverse vinyl collection almost a century later.
The sound waves from my childhood roll on. In another form.
From another room.
Tracklist
See more items
Others have bought:
Pell Mell - Marburg (Remastered)
Pell Mell
€9.99
CD
Buy!
Info
Håkan Hellström - Det Kommer Aldrig Va Över För Mig (
Håkan Hellström
€21.99
LP
Pre-order
Info
Håkan Hellström - 2 Steg Från Paradise (Ltd Blue Viny
Håkan Hellström
€27.99
LP
Pre-order
Info
Hellström Håkan - Känn Ingen Sorg För Mig Göteborg
Hellström Håkan
€19.99
LP
Pre-order
Info
Information
ABBA Voyage delivery informationNorwayFAQTerms & Conditions Gift Card
Contact
Campaigns
Newsletter Newsletter settings